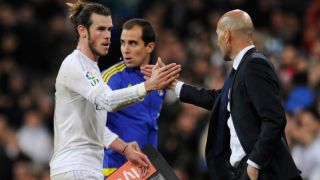 The former midfield star got off to the perfect start as head coach at the Santiago Bernabeu as Gareth Bale's hat-trick helped Madrid to a 5-0 thrashing of Victor Sanchez's side.

Navas has been impressed with the confidence Zidane has exuded during his first week as Rafael Benitez's successor and believes his pre-game message to the players was invaluable.

"He told us to be relaxed, to put in our best effort and to enjoy ourselves," he said, as quoted by Marca.

"You always have to have confidence to do things well and to try to get everyone working in the best way possible.

"Zidane talks with confidence, as a manager has to talk.

"It was a good game from the team. I kept a clean sheet, which is important."

Madrid's win takes them back to within two points of Liga leaders Barcelona, who thrashed Granada 4-0 earlier on Saturday.