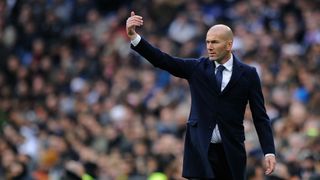 Roberto Carlos believes Zinedine Zidane will bring major titles to Real Madrid, but believes the fans will need to be patient.

The pair were team-mates at the Santiago Bernabeu between 2001 at 2006 during the 'Galacticos' era, winning the Champions League in 2002 and La Liga the following year.

Zidane has won his first two matches at the helm since replacing Rafael Benitez on January 4, scoring 10 goals in the process, but the club remain four points adrift of table-topping Atletico Madrid.

Roberto Carlos has no doubt the good times will continue to roll for his former side, but urged patience from supporters as Zidane makes the team his own.

"I'm sure that will happen, that Zidane will win big titles with Madrid. In La Liga they're doing very well, in the Champions League Madrid are playing really well," the Brazilian told Qatar's Supreme Committee for Delivery and Legacy.

"Madrid have to get back a little to what we were before. Forget what's been going on. In the present under Zidane players need to be a happy team, a team that has fun on the pitch, shows they’re friends, that listen when Zizou talks, that understand what Zizou wants.

"Most importantly the fans of Real Madrid need to have patience, as Zidane has just arrived. He has to build his team, build it around the players he trusts and from there will come titles.

"The [coaching] experience he gained with Castilla is important, but working with the first team is different. He has started very well. He has people around him who are intelligent and will help him a lot."

Roberto Carlos offered praise to compatriot Neymar, believing he will improve upon his third-place finish in the voting for the 2015 FIFA Ballon d'Or and become the best in the world.

The former left-back highlighted the way the 23-year-old stepped up when Lionel Messi was ruled out for two months from September with a calf injury to prove his quality.

"Neymar at this moment, in my opinion as an ex-player and now coach, has improved very fast. He went to Barcelona, adapted very quickly and now he's the third-best player in the world," he added.

"I think in a very short time he will be number one because he's progressing very fast. When you go to a club you have to adapt to the club, the country, food, but not Neymar.

"When Messi was out, Neymar took on the responsibility for the team and is playing spectacularly well."