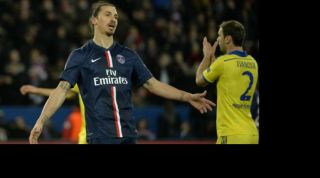 Ibrahimovic was sent off in the 31st minute of PSG's dramatic 2-2 draw at Stamford Bridge last week, which sent the Ligue 1 champions into the last eight on away goals.

The decision appeared harsh on Ibrahimovic, who was dismissed for a foul on Chelsea midfielder Oscar when challenging for a 50-50 ball.

PSG went on to produce a superb performance with 10 men to progress against the odds after extra time, with Chelsea boss Jose Mourinho calling for Ibrahimovic's red card to be rescinded in the aftermath.

A UEFA statement on Thursday read: "The Paris Saint-Germain [player] Zlatan Ibrahimovic has been suspended for one (1) UEFA competition match for which he would be otherwise eligible.

"As a result, the player is not eligible to play in the first-leg of the UEFA Champions League quarter-final."

In addition, Serge Aurier has been banned for three matches for his criticism of referee Bjorn Kuipers on social media.

His ban will see him miss the quarter-finals as well as the first leg of a potential semi-final.