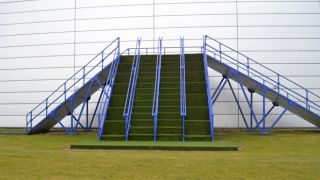 Season-after-season Everton compete for European qualification on a shoestring budget. What’s their secret weapon? A flight of stairs, that’s what.

The mobile staircase at their Finch Farm training ground features a 30 and a 40 degree ramp along with 12 and 24-inch high steps.

“They are used for increasing acceleration and power,” explains Dave Billows, Everton’s former strength and conditioning coach. “When we really want the players to work on explosive acceleration, the ramp enables us to really challenge the joints and muscles.”

Among the drills arranged for the players by the Everton coaches are short sprints – half a dozen on each ramp – with short rests in between, then single-leg hops up the 12-inch steps followed by two-legged bounds up the larger steps.

“The stairs are used across all the different teams connected to Everton, from the under-18s upwards,” says Billows. “We’ll use the stairs in the latter stages of pre-season training and sporadically throughout the season.”

The equipment forms just part of a plyometric focused programme for players that also features bungee cords and pulling sledges – so don’t be surprised to see Baines, Jagielka & Co. bounding up those famous Wembley steps if they win any silverware next season.