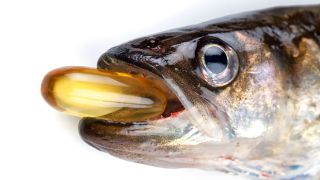 David Beckham’s ability to pick out a pass that nobody else saw, let alone thought of, may have owed as much to oily fish as it did to hours of practice on the training field.

During his playing days at Real Madrid, Becks popped GO-3 omega-3 supplements, which accelerated his on-field thought process (it must have worn off when he hit the high street for some clothes shopping). How? Let FFT explain the science.

A decent dose of fish oils can raise your mental game and make you a smarter player, according to University of Valencia research carried out among Spanish players.

A study that split a team into two groups – one taking a placebo pill and the other a 3.5g fish oil supplement containing omega-3 fatty acids – revealed that those on the fish tablets scored much higher in tests for sharper responses and quick thinking.

It’s not the first time fish intake has been linked with better ball play either. “There are several studies that show how elements in omega-3 can help improve performance in sport,” explains Matt Lovell, sports nutritionist at Manchester City and Tottenham Hotspur.

“It’s been shown to have anti-inflammatory properties to aid recovery, and cognitive [brain] function benefits too – it may even help players recall moves like successful set-pieces.

“It’s best if you get it naturally from oily fish, but not all footballers are fans of fish so instead they’ll take supplements containing omega-3 fatty acids,” Lovell adds.

Take that alongside your Sunday morning paracetamol and your brain should kick into gear just in time for kick-off.

You can read more from nutritionist Matt Lovell at sportsnutritionvlog.com