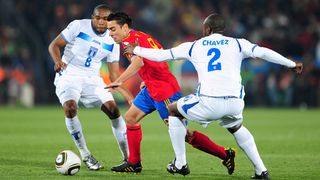 This demonstrates why Xavi is, in my opinion, the best playmaker in the world. It shows that his first touch takes the ball away from the opposition; this is called touch direction. Most people think the key to first touch is distance (how close the ball stays to your foot on receiving it). I think first touch is more about the right direction. His body shape and touch has put the ball into an area where the opposition can’t get it.

Fend off the opposition

Now it’s all about protecting the ball. Against Honduras, he uses his arms to put distance between the ball, Chavez and Palacios. He’s not trying to foul them but simply fend them off. Also, he accelerates over one step. I call this ‘football speed’: the ability to get away from your marker over five yards. It might not sound impressive, but it can make all the difference when combined with touch direction in a crowded midfield.

Alter the angle at attack

This is an example of shielding the ball by changing direction, something Xavi is the best in the world at. Changing direction isn’t just about changing the angle of your attack, it is often used to retain possession. The other thing is that he’s looking up. All the best players ‘sneak a look’. This doesn’t mean you have to get your head up, but simply lifting your eyes for a millisecond can be enough to make you aware of what’s on.

Having seen what’s on he can now play the killer pass. And there’s no-one better at playing a killer pass – a pass that creates a goal chance – than Xavi. A sequence of touch direction, shielding the ball, acceleration, change of direction and killer pass. That what Xavi and playmaking football is all about.