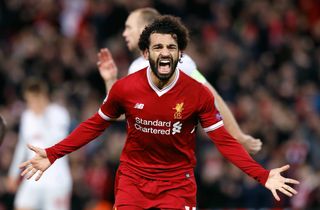 I will win more aerial battles
“As an attacker, perform drills that feature taking control of the ball directly from a goal-kick [for your team] and have a team-mate act as an opponent to challenge you. During a match, focus on positioning yourself between your opponent and where the ball is going to land. This makes it more likely that your opponent will come over the top of you, conceding a foul. The defender’s only option to avoid fouling you is to stay behind you, enabling you to head the ball on to a team-mate.”
Jon Goodman, ex-Wimbledon and Republic of Ireland striker and sports scientist with thinkfitness.net

I will not miss a game through illness
“An easy way to avoid viruses is to use antibacterial hand gel regularly after being in public places or shaking hands. Also ditch the vitamin C and take up to two probiotic drinks a day – laboratories in Loughborough have found that taking these during intensive training can help protect the immune system. Have a carbohydrate drink for training sessions lasting longer than an hour, as low carb stores have been linked to impaired immunity. And have your recovery drink immediately after training. The longer you wait to have a recovery drink after training, the higher your risk of infection. A low- fat milkshake is ideal for recovery.”
Mayur Ranchordas, nutritionist with Bolton Wanderers and senior lecturer in sport and exercise nutrition at Sheffield Hallam University

I’ll stop drinking until we win something
“Avoid drink triggers by changing your routine. Meet at coffee bars instead of the pub or go for a meal at the start of the evening instead of ‘a few beers and a curry’, since you’re more likely to skip the meal once you get into a drinking session. Opt out of drinking rounds you don’t need or at a pace you can’t handle. Leave your card at home, too, so you only drink what your ‘sober’ budget allows. Have de-alcoholised drinks such as Ariel Blanc wine or Holsten and Jupiler beers.”
Edmund Tirbutt, author of Beat The Booze

I will not get sent off for the rest of the season
“Linking a player’s values and goals to their reputation can generate powerful long-term focus, but the ‘quick-fix’ nature of today’s game means reducing frustration. Emotional awareness requires practice, so take a regular check-up – whether you’re driving to the training ground, shopping or reading a newspaper. When you catch a negative emotion, label it with a silly word or name. Sounds stupid? Yeah, calling your frustration ‘George’ or ‘Felicity’ should raise a smile and destroy the original emotion. It’s called ‘meta-stating’ and on the pitch should be combined with focusing totally on the referee – imagining him holding a red rose!”
Ken Way, sports psychologist and author of Mental Mastery (visionsports.co.uk)

I will be a leader on and off the pitch
“Good leaders direct, motivate and encourage team-mates and ask for that extra five or 10 per cent effort at critical times. Become aware when a team-mate’s focus has slipped – remind them to concentrate harder. ‘Sectionalise’ elements of the game so that the mental task – whether that’s being focused, putting in more effort or whatever – appears to be much shorter (“This corner – your man!”). Doing this means increasing your awareness of team-mates’ games and attitude as well as your own. Strangely, asking others to ‘get focused’, for example, will have a huge impact on your own focus too.”
Ken Way

I’ll eat right for games
“Focus on nutrition the day before as well as matchdays to keep your muscles loaded with fuel. Remember, carbohydrates are not all the same. Carbs such as white bread and sugary cereals raise blood sugar levels quickly. You need to stick to carbohydrates such as brown rice, rye bread and porridge, which raise blood sugar levels slowly. Remember, electrolytes and water are just as important as carbs. Players can lose up to five pints of sweat during a game so it’s crucial to start the game hydrated.”
Mayur Ranchordas

I’ll be quicker off the mark
“This is all about improving your reactions to events and ensuring that your initial burst of speed is effective. Mastering the way you react to situations in a game is, by definition, something you can only really perfect in matches. But for firing up your ‘plyometric’ muscles – the ones that power you to be quick off the mark – you can use simple training drills. Do some basic drop-jumps – drop off a 30cm box, hit the ground and jump as high as possible.”
Darren Burgess, High Performance Manager at Port Adelaide Football Club

I’ll lose half a stone in four weeks
“Get to training 20 minutes early and do interval sprints. Sprinting is one of the best ways of dropping weight and it’s practical for footballers too. At the gym, lift heavy weights in big ‘compound’ movements such as squat and deadlift – you’ll naturally increase both testosterone and growth hormones, which help to build muscle and burn fat. Also, get on the cross trainer – it’s nice to give your knees a rest when fitting in the obligatory cardio. Combine this with protein-based meals, lots of vegetables and drinking more water than normal to flush out fat cells and toxins.”
Dan Roberts, personal trainer at danrobertstraining.com

I’ll be stronger on the ball
“Increase the amount of time you spend doing resistance training on your feet. Think cable work, lunges and any kind of core work. Remember strength on the ball comes from the force you can exert on the ground, not just through your upper body. On the pitch you can improve your strength on the ball by practising your one-against-one duels. Timing, positioning and the ability to shield the ball all come from practice on the pitch, not in the gym.”
Darren Burgess

I’ll sleep properly before games
“Create a personal daily or weekly recovery plan, understanding that to perform at your best requires equal amounts of activity and recovery time. Adopt an every day wake-time that suits your work, sport and social routines and stick to it. So if you’re waking at 7am on weekdays, do the same at weekends. Create a pre-sleep routine and use a controlled nap on Saturday to help balance against any increased social activities the night before. Apply the same sleep routine on Sunday after the game to avoid breaking your normal routine going into the working week.”
Nick Littlehales of sportsleepcoach.com

I will score more goals
“Focus on quick reaction drills and fast, short sprints as much as shooting in training to improve your goal tally. Goalscoring is a numbers game – the more attempts that you have from the right areas on the pitch, the more goals you will score. Top goalscorers bag more when inside the six-yard box, so practise reacting more quickly to spills from the goalkeeper, mistakes and rebounds from defenders and with one-touch finishes to add at least another five goals to your season tally.”
Jon Goodman