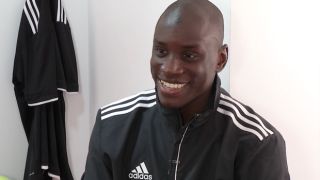 A striker can produce a selfless performance full of industry and endeavour, but if they’re not scoring goals they’re miserable.

Like a sulky teenager they mope around the pitch cursing their luck in front of goal.

Frustrated by their lack of net rippling action they start blaming their malfunctioning boots or the ‘dodgy’ surface or their lack of service. The longer the drought goes on, the more glaring the misses get. Their confidence all but disappears and a striker without belief, is like a Sir Alex Ferguson without chewing gum. They need it.

So how do you get them scoring goals again? Chelsea’s deadly striker Demba Ba knows how and he’s kindly shared his words of advice with FourFourTwo Performance.

The former Newcastle United hitman went 14 games without scoring after making a prolific start to the first half of last term.

Ba took the backseat as strike partner Papiss Cisse set the Premier League alight following his £10 million arrival, but the Senegalese hotshot returned to form this season netting 13 times for the Magpies before his £7 million move to Chelsea.

If your golden touch has abandoned you or a team-mate, watch this video and let Demba show you the way back to goalscoring glory.