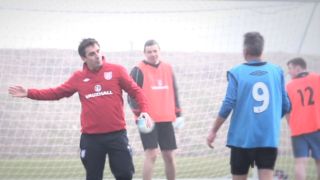 Four attackers are positioned just beyond the halfway line, with three defenders stationed along the 18-yard-box. The coach stands in the centre circle with a ball.

The coach passes the ball to one of the attackers – in this case player B (see video). The attacking players must now try to break through the defence and score. Attacker A makes a run around the outside of defender A to create space for a shot. Attacker A takes advantage of the overload and drives through the gap to take a shot at goal.

Neville was talking at an event for Vauxhall, the England sponsor. Keep up to date with news and comps at vauxhallfootball.co.uk, @VauxhallEngland andfacebook.com/VauxhallEngland