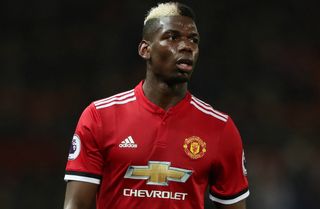 Paul McGuinness
Former Manchester United youth team coach
“Paul was a very popular lad. He was just like a Pied Piper with the younger lads, who really looked up to him. His background as a street footballer was clear. He’d played in cages in France, which hone your skill. We let him develop at United by letting him play freely, like he was in a playground. Rather than having a coach bark orders at him, it relaxed the players who weren’t afraid of making mistakes, so Paul carried on practising that flick he does over the head of a rival.”

Jonny Evans
West Brom centre-back
“I was amazed someone of his age looked so at ease with players of the quality of Ryan Giggs and Paul Scholes. He had power, skill and complete control of the football. His skill and technique for such a big player meant he could manipulate the ball, yet he was also so strong he could hold people off. Scholes would kick him every day to try to get the ball off him.

"He’s a superstar and he’s going to get better and better. Some of his positional play can sometimes be a bit gung-ho, but he’s got so much more than other players can offer. His technique means that he can manipulate the ball, his touch is excellent and then you have his pace and power. What else does he need other than using his brain at the right time and picking the right passes?"

Patrice Evra
Former Manchester United left-back
“Paul is an eccentric, every day he wants to create something new. He’s a creator, not only in football but in his life, and you see that on social media. If he has a bad game, people criticise him for what he does on social media or his haircuts, but he won’t change. He thinks for himself and acts for himself.

“People expect miracles because he cost so much. They criticise him if he doesn’t score any amazing goals, but Paul is not a goalscorer who scores 30 a season. I sometimes worry for him because he’s still so young and too much pressure can restrict your game. Paul has got to be free, to enjoy, to smile. That’s when he’s at his best. To control a team and be a leader takes experience, but he is very mature for his age. He talks with the younger players and respects the older players. He wants to learn and he’s good in the dressing room, where he’s serious and yet brings lots of laughs. Paul is a happy guy – we should be thankful we are being paid to play football every day.

“He’s working hard to be more consistent, to become a machine who wants to win everything. Everyone can have a great game and score a great goal. The great players have lots of great games – they have consistency like Andres Iniesta, and Frank Lampard. I think Paul can be in this class, too, but he’s different from them. He has everything to become the best midfielder in the world."

Michael Carrick
Manchester United midfielder
“Paul can control a match, his passing is very accurate even over long distances. He can slow the game to give his side control and he always has a strong influence over a game. Only the best can do that.”