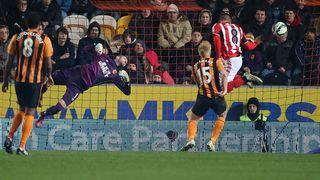 “If you want to play a high-energy game you obviously need to be super fit. There’s no substitute for playing football, but there are other things you can do to supplement your fitness – I like to box.

For me, that’s the hardest thing I’ve ever done. I do a lot of pad work with the physio and enjoy it.

You’ve also got to make sure you’re properly prepared for a game. At City we have a pre-match meal about three hours  before the game. We’ll load up on carbs, like pasta, have a bit of protein and make sure we’re fully hydrated.

All this has helped me play the pressing game the new manager has come in and introduced. To practise this in training we play in one half of the field and have an attacking team versus a defending team.

The defending team get the ball from the goalkeeper and the attacking team, of about eight men, have to press the ball together. The closest man to the ball presses and every other man takes the next man on.”