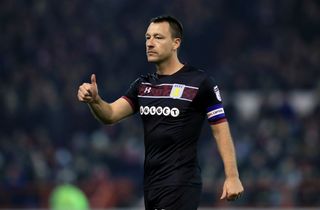 1 EARN RESPECT
Don’t ask for respect; earn it. Sometimes it’s not what you say, but what you do. Training hard day-in, day-out with your team-mates and impressing them with your performances on the pitch will earn respect. If you’re doing the right things, when it comes to ordering someone about or asking them to give a little bit more they will give it to you.

2 BE HONEST WITH EACH OTHER
When the team is going through a poor run don’t start blaming people behind their back. If there’s something to say, have it out and deal with it. Sometimes you’re going to be told something you don’t want to hear and you have to take it on the chin and get on with it.

3 KNOW YOUR TEAM-MATES
As captain, you have to know your team-mates inside out. There are certain players at Chelsea I could give a kick up the backside and get a good response. Then there are others who need an arm round them. Players go into their shell if you shout at them in front of the team. You’ve got to know who responds to what.

4 GUIDE THE YOUNGSTERS
If a young player is feeling the pressure before a big game, have a quiet word before kick-off and help them with their nerves. I still get nervous for every Chelsea and England game. The day I don’t is the day I am taking it for granted. No matter who we’re playing, nerves are always there, which is a good thing – explain that to them.

5 STAY CALM AND IN CONTROL
Always stay positive and fully focused – especially when a game isn’t going to plan. Trust what the manager tells you and do your best to instill confidence throughout the team. We’ve played against sides where one of their players has given the ball away a few times and his head went down. You can’t let this happen to your team-mates because the opposition notice things like this.

6 SHOW NO MERCY
If you’re beating a team 5-0 don’t worry about taking the mickey. Scoring an extra one or two goals could prove vital at the end of the season. Encourage the team to always push until the last minute. Never just try to keep the ball and humiliate the other side; always try and punish them even more by continuing to score goals.

Recommended for you:
Bryan Robson: How to be the ultimate captain
Ashley Williams: Becoming a captain
Peter Taylor: Selecting a captain
Vincent Kompany: Lead your team
Michael Ballack: The secrets to leadership