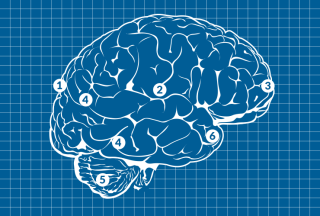 This vision-dominated area of the cerebrum helps you monitor your surroundings and respond. “It’s relevant to spatial awareness,” says Bates. “A lot of your speed of thought, decision-making and reaction starts from here. They are all the psycho-motor cognitive elements required to perform, such as monitoring your man, pulling off shoulders and responding to a team-mate.”

This regulates your emotional reactions. Bates explains: “It’s where the red mist can descend when you’re playing. If you get provoked – if you’re shown a red card, for example – you can experience something called an ‘amygdala hijack’. You become emotional, the frontal area of the brain becomes secondary, and rational thinking goes out the window.” Naughty limbic system.

Responsible for conscious thought, problem-solving and behaviour, this is your on-pitch computer for processing tactics, ball-striking and runs. “The brain is complex and doesn’t act independently,” says Bates, “but the frontal lobe contains the pre-frontal cortex, which plans movement, and the pre-motor cortex, which helps to organise movement patterns and sequences.”

When you learn to play, you use a mental pathway called the dorsal stream. Once you’ve mastered it, it becomes second nature – the ventral stream. “Skills become non-thinking, instinctive,” says Bates. “However, neuroscientists believe that if you’re under pressure in a big game, anxiety can make you revert to the dorsal stream and overthink what you’re doing.”

Also known as the ‘little brain’, this part of your bonce doesn’t initiate movement but does fine-tune the information it is receiving about your motor control, thus playing a vital role in posture, balance and co-ordination. “When you decide to move, messages travel from the cerebellum at the back of the brain into your central nervous system,” explains Bates.

Got a team-mate who refuses to pass, even when you’re in acres of space? Who refuses to listen to the gaffer and plays entirely for themselves? Maybe they’ve had a knock to the temporal lobe, the area of the brain responsible for hearing, language and memory. “This becomes active when you’re taking in tactical advice from the sidelines or responding to a call,” says Bates.

The importance of boosting your brain power