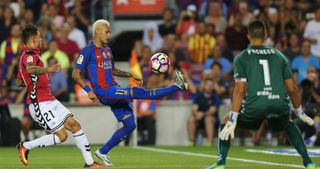 Hi Neymar Jr, how did street football shape the player you are today?

It definitely helped me to develop a fast game and that Brazilian smartness. I had a very happy childhood and I can still remember waking up every morning just wanting to play football – even though I knew I had to go to school. As soon as I arrived home I used to grab my football and go straight out and I’d play until late at night with my friends. Nothing else seemed to matter to me at that age.

Did your coaches encourage you to play football on the streets?

No, it was quite the opposite actually. My coaches were always scared I’d get injured and miss training or a game but it didn’t stop me!

Which coach has had the biggest influence on your career?

I’ve been lucky to play under so many great coaches who helped to improve my game in different ways but I’d say the one I have the most affection for is (Antonio Dos Santos) Lima. He was my coach when I was a teenager and he’s a guy who I had a real bond with.

What do you remember of your professional debut for Santos at 17? How did you feel, walking out to a crowd chanting your name?

I didn’t really know what to do! I didn’t know whether to smile, applaud the crowd, wave my hands in the air or just stay serious. It feels quite complicated when you’re that young but I ended up playing that first game and the rest is history.

You’re a very skilful player. How did you become the player you are today?

Futsal had a massive influence on me when I was growing up. It’s a very demanding game and it really helped to develop my technique, speed of thought, and ability to perform moves in tight spaces. I think futsal is a fundamental part of a footballer's life.

When you’re out there playing, you’re forced to think fast and move faster – if you lose a second, the ball will be gone. It’s a more dynamic game and it’s come in handy at Barcelona. When we play there’s not much space on the pitch so you need to react quickly on the field. There’s no doubt futsal has helped me a lot in my career, it’s one of the biggest passions in my life. I used to love playing it, but unfortunately I had to stop when I was 13 or 14 in order to grow up as a footballer.

What are your fondest memories of that time in your life?

I can remember being just seven-years-old when I won my first individual award, which was a pretty special feeling as a child. I was making my debut for a team called Portuguesa, another club from Santos city, and we finished third in a futsal tournament. I scored 23 goals.

Was it difficult to make the move from futsal to football?

Not really. I started playing football from the age of 11, so I combined football and futsal until I was 14. I remember there came a point where I couldn’t play both anymore and had to choose between the two and of course I chose football. It’s funny, I can still remember my dad watching all my futsal games and making comments about how I played even when I was so young. He was always there following everything I did.

Who is your futsal idol?

It has to be Falcao, without a doubt. He’s one of the athletes who inspires me the most. We have a very close relationship and he’s one of those people who walk into your life and you want to keep them. As a futsal player Falcao is the best of all time, he is outstanding. Besides being my friend, he's ace.

It's hard to give advice to young players. You see a lot of youngsters who have potential but for various reasons they don't reach their goals. It’s quite sad when that happens but from my experience, if you have the same dream I had as a child then there are certain things you need to do. You must stay focused at all times and ignore any distractions. Also, make sure you always remain attached to your family - you must trust them. It’s important to keep your closest friends around you as well – that’s another big thing. On the pitch you must always give everything and train hard – if you do all of those things then you’ll give yourself a chance.

Neymar Jr was talking at the World Final of his global 5-a-side tournament. For more information and to sign up for 2017 please visitwww.neymarjrsfive.com’