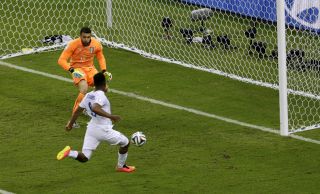 Set up Position mannequin on edge of the D, with a ball just inside the 18 yard box. Place a cone inline with mannequin, 16 yards away. Servers stand 12 yards to sides of mannequin.

This builds explosive power in the legs. Assume split squat position, with your front foot slightly turned in, knee above toes and your back leg raised on a bench. Keep your hips and shoulders square and your chest and head up. Bend front knee and drop hips to 90 degrees. Return to start and repeat.

16: the number of passes Sturridge exchanged with Luis Suarez during Liverpool’s 3-1 win at Sunderland. (via FFT’s StatsZone app)

“The top men for me growing up were Zidane and Ronaldino. I’d watch Ronaldinho at Barcelona and think, ‘Oh my god, what am I seeing here?’”

Average distance covered by Sturridge in the Premier League this season. You would need to run around the Anfield pitch 35 times to equal this distance.

He recently won a Call of Duty celeb tournament. Studies have shown that playing computer games for 45 minutes a day can enhance reaction times.

For more football tips see:
Radamel Falcao: How to be a penalty-box predator
Thierry Henry: Finishing at speed
Wayne Rooney's shooting drill
Olivier Giroud: How to create and conquer
Rooney: Big match preparation
Ibrahimovic: How to play as a targetman