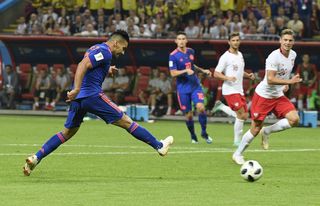 The rule of five

“The first five yards of any move you’re involved in are among the most important you can make as a striker. Forwards like me act on instinct. There’s no better feeling than getting in front of a defender to make a difference for your team. They’re the difference between scoring a goal or not, or helping your team-mates find the space to score a goal themselves. In close games, such moments can turn a draw into a victory.”

Get on the training pitch

“You can develop how you recognise goalscoring situations by working with wingers in training and sprinting forward to meet their crosses. Jostle with a defender and look to get beyond them as you approach the box. Your intensity in training is crucial to improving. It trains your body for what to expect in a game. Part of the art of being a striker is anticipating what’s going to happen next. You have to out-think a defender to get the better of them.”

“Being able to shoot with both feet is such an important weapon for a striker to have. Being able to surprise them is crucial. I like to mix up what side I go when I come up against a defender in a one-against-one situation. Part of the skill is mental. Convince yourself that you can play with both feet and, with practice, you can improve. In every session, train yourself to take touches and play passes with either foot and then you’ll build up confidence to shooting that way too.”

Aim
This simple drill has been designed to develop explosive power in the sideways and backwards movements used to confuse defenders. This exercise will also work the darting movement a striker uses to attack a cross.

Set-up
The striker puts on a Viper belt with two flexi-cords attached to the front and back. Place two markers seven yards apart on the edge of the 18-yard box (A and B on image, right). Use five cones to mark out a crescent shape inside the penalty area.

Tips
• Work off the balls of the feet
• Keep steps short, precise and explosive
• Use your arms to propel you forward
• Feet should be kept shoulder-width apart

SAQ International are the established leaders in Speed, Agility and Quickness training. For more information visitwww.saqinternational.com