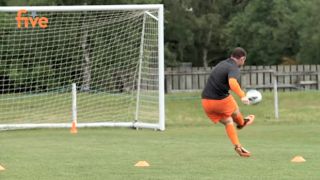 Is there a more consistent Premier League goal poacher than Wayne Rooney? The former Manchester United striker has registered 200 Premier League goals - only the second man to do so - and won Match of the Day’s Goal of the Season award a record three times.

From the spectacular to the predatory, Rooney can do it all. With a fraction of his ability, an amateur footballer would wreak havoc on a Sunday morning.

Unfortunately, sports scientists haven’t found a way to clone natural talent - yet. In the meantime FFT can help you make the most of what you’ve got.

Rooney’s success isn’t just down to natural talent. Yes, he’s been blessed with an unworldly gift, but he honed his powers on the streets of Merseyside and the training pitches of the Premier League.

To help you raise your game he teamed up with Fivestar training to design a training app full of one-of-a-kind training sessions that you can do yourself.

Rooney demonstrates the drills, guiding you through from start to finish. Our friends at Fivestar training shared exclusive content from the app with us, giving you a taste of his training regime. Enjoy.

For more football tips see:
Olivier Giroud: How to create and conquer
Rooney: Big match preparation
Ibrahimovic: How to play as a targetman