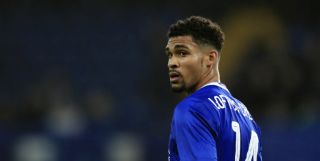 How important is athleticism for the modern midfielder?

I think it’s a big part of my game and it’s great to have that as a midfielder. In the middle of the park sometimes it’s a fight and you face some big strong opponents, so for me I use that to my advantage. I like to accelerate past people with the ball and also to track back and get back in position.

How difficult is it playing against someone with strong physical attributes?

Playing against someone who is strong, quick and powerful can be extremely difficult, because sometimes you just can’t get close to the ball or them. It's a massive advantage if you can use those qualities on the pitch. That’s why I work so hard on it, to improve it, so I can have that edge on the pitch.

Can you pick out a particularly tough opponent?

Yaya Toure is always tough, because even if you get close to him, he’ll just put his arm on you and you can’t get near the ball. I remember facing him for the first time very clearly!

Which midfielders did you try to emulate when you were a child?

My idol was Zinedine Zidane. I know he’s not the strongest or fastest, but on the ball; he was just so good, so relaxed, so calm. People say I’m calm on the ball today, because I tried to be like him when I was younger.

Does a modern footballer have to be technically sound as well as an athlete?

Was the fitness level of the Premier League a shock to you at first, in comparison to academy football?

I noticed a massive difference. Playing in the Under-21s was physically easy for me because I was always bigger than everyone else. But when I had my debut in the Premier League I saw how intense it is. I was 18 at the time so people were on my level physically and sometimes even stronger. For me, that was an opportunity to work on the technical side of my game, because the strength didn’t always work for me. Now I think I’ve got a good balance of technical and physical ability.

What things did you work on when you first came into the first team?

I think it was the fitness, because the stamina to play 90 minutes of Premier League football is very hard, and it was a challenge for me. I’m still working on it because I'm not playing too many games at the moment. You have to try to get your fitness from training, so that’s always an area I work on.

How fast is it out on the pitch in the Premier League?

You’d have to play in it to experience it because it’s a different level. On TV it looks fast, powerful and athletic, but when you’re in the game it’s just different. I can’t really explain it, it’s very hard!

How difficult is it to maintain your technique when you’re fatigued?

It’s a thing we work on in training, controlling the ball and passing when we're tired. It’s difficult because when you’re fatigued your mind fatigues as well and you’re not concentrating properly. That’s a big thing to work on and something you need to practise like anything else.

Every day in training you get to points when you’re tired, and it’s all about having the awareness to think ‘okay, I’m getting a bit tired’, and to concentrate on not losing the ball. You have to make sure you keep possession by keeping things simple because when you’re tired it’s just about keeping the ball until you’re fully recovered.

What do you do to recover from games quickly?

The fitter you are the faster you recover. If you’re used to playing 90 minutes every week, it’s easier to recover. Sometimes you have a game every three days, which means you have to get everything right - nutrition, sleep and active recovery to get the blood flowing. There are a lot of other things, such as ice baths, which can help – it’s all about finding out what works for you.

What does a typical week look like for Ruben Loftus-Cheek?

Monday is normally a hard day, as is Tuesday. You have two hard days, which involve a lot of running and a lot of gym work. Then the closer you get to a game you come off it, so you start to feel more fresh and ready to play. So that’s my week and I tend to do a little bit more in the gym just to keep myself fit and ready to go.

What do you work on specifically in the gym?

I’m already a big guy, big in structure, so I don’t need to do too many heavy weights because I don’t want to get much heavier. But for me my core is really important. Core is a massive thing in any sport. It helps massively with energy transfer, your kicking, change of direction; that all comes from your core.