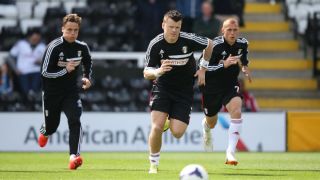 I really struggle to last 90 minutes because I burn myself out too early in the first half. How do you maintain your fitness levels throughout the game?
Rory Murray, via email

"Interval training is something I've used in my training regime for long parts of my footballing career.

You should repeat this four times so that you're running for 32 minutes in total. You'll find this is something that really helps your general fitness as the season goes on.

I think the days have gone when you jog around the field for half an hour. It's more about short, sharp bursts in the modern game."