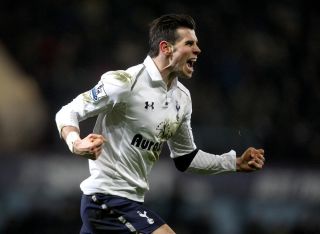 Some awards are easier to predict than others. Although the judges were as rigorous as with any other category - and there were a lot of strong contenders for this particular award - there was only ever really going to be one winner.

If an award were to be given for the player who creates the highest volume of newsprint - and its digital equivalent - Bale would walk that one, what with the constant tabloid transfer noise. That won't be going away any time soon, as the world's biggest clubs aim to capitalise on Tottenham's inability to qualify for the Champions League.

But Spurs' absence from next season's UEFA beanfeast can hardly be blamed on Bale, who at times appeared to be on a one-man mission to finish in the top four. His 21 Premier League goals were surpassed only by Luis Suarez and Robin van Persie, and Bale's 9 goals from outside the area was unmatched by any player in Europe's top five leagues in 2012/13. He also became the first Tottenham player to surpass 20 top-flight goals in a season since Jurgen Klinsmann in 1994/95.

The main pretenders to Bale's throne as the best attacking midfielder were also London-based. Santi Cazorla caught the judges' collective eye with impressive stats at the business end of Arsenal's midfield triangle, while Chelsea's Juan Mata contributed both goals and assists. But Bale would be the first choice of most fans, players, managers, bet-placers and fantasy-leaguers, and he is the thoroughly well-deserved Stats Zone Premier League Attacking Midfielder of the Year.

Key Stats: The 3-2 win at West Ham in late February summed up Bale's season. After his early shot from outside the box opened the scoring, he also closed it with the injury-time winner - another long-distance job and his 8th goal in 6 games. In all he hammered 10 shots at Jussi Jaaskelainen, with 6 on target (a season high for any Premier League player), and created 6 chances - none of which were taken.