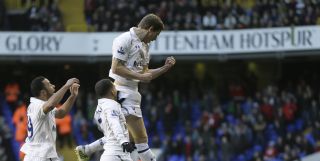 Tottenham have a history of centre-backs who can play a bit, so when they signed a ball-playing Belgian who had graduated from the Ajax academy, hopes were high - and Jan Vertonghen has lived up to the expectations.

Although he spent part of the season on the left of Tottenham's back four, Vertonghen's self-proclaimed strongest position is centre-back, and that's surely where his future lies. His best spell of form coincided with his club's, which perhaps underlines his impact in the middle of the Spurs defence.

But Vertonghen isn't afraid of the grittier side of defending: in his debut Premier League season, he was one of only four defenders to make more than 100 tackles and also contributed the 8th most clearances (296).The Stats Zone Awards judges also commended the performances of Swansea's Chico Flores, Liverpool's Daniel Agger and Arsenal's Per Mertesacker, but Vertonghen is the deserved Centre-Back of the Year.

Key Stats: During Spurs' 2-1 win at Swansea in late March, Vertonghen was everywhere - contributing a goal, an assist, 4 interceptions and 7 clearances as well as a couple of tackles. To underline his versatility, his tackling peak came at left-back during the 2-1 home win over Liverpool in late November, when his 11 tackles went a long way to winning the points.