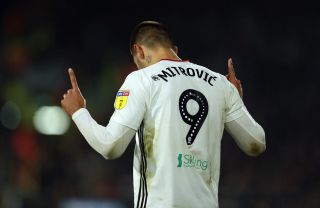 Aleksandar Mitrovic is the Sky Bet Championship’s most prolific striker so far this season as he targets a return to the Premier League.

The 25-year-old Serbia international’s goals have helped to propel Fulham into the thick of the race for promotion, behind top two Leeds and West Brom, and underlined his goalscoring prowess.

Here, the PA news agency takes a closer look at a man on a mission.

What is his background?

Smederevo-born Mitrovic burst on to the scene as a teenager in his native Serbia at Partizan Belgrade, having cut his teeth at their affiliate club FK Teleoptik, and was top scorer as they won the league title for the sixth successive season in 2012-13. His form for Partizan earned him a £4.3million switch to Belgian side Anderlecht, the club from which Newcastle signed him for £14.5million in July 2015. He joined Fulham on loan in January 2018 and completed a permanent transfer to Craven Cottage six months later for an initial £22million.

Does he have anything to prove?

To his fans – of which there are many, both at home and in west London – no. Something of a cult hero on Tyneside, he enjoys a similar relationship with the faithful at Craven Cottage, where the song “Mitro’s on Fire” has become a regular refrain. However, he managed just nine goals in his first top-flight season with the Magpies – at the end of which they were relegated – and ultimately then manager Rafael Benitez decided loan signing Salomon Rondon was a better option and sanctioned Mitrovic’s move to Fulham, for whom he had played a key role in their successful 2017-18 promotion campaign.

How is he going about that task?

Aleksandar Mitrovic – all goals this season

Missing your football?Here’s one for you, Fulham Football Club fans! Every single goal scored by Aleksandar Mitrovic so far this season…#EFL | #SkyBetChampionship

Very impressively. Despite his 11 Premier League goals, Fulham were relegated after just one season, but he has set about the task of helping to restore their fortunes in determined style. When the season was suspended, he had scored 23 goals in 34 Championship appearances and added eight more in just five outings for his country to go with the nine in 10 he had managed during the previous campaign.

What are his strengths?

Mitrovic is a striker who thrives on service rather than mobility or trickery. Put the ball into the right areas and he will score goals. A physical presence who has no issue with throwing his sizeable frame in where it hurts – the red card offences which blighted his early career in English football appear to have dried up – he has bullied defences both in the Championship and on the international stage and would clearly relish another chance to prove he can do it in the top flight too.

How key is he to Fulham?

Scott Parker has been at pains to remind people that the Serbia international is still only 25 and in many ways, is still learning the game in a third different country. However, the fact that he has started 34 of the club’s 37 league games to date with only suspension and an ankle injury interrupting his run illustrates his status. Parker has described the frontman as “an absolute animal” and “the talisman”.