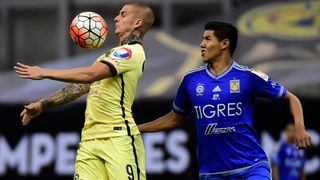 America have claimed back-to-back CONCACAF Champions League crowns after a 2-1 win over Tigres UANL on Wednesday.

Ignacio Ambriz's men set up their success with a 2-0 away win in the first leg and completed the job 4-1 on aggregate at the Estadio Azteca.

The Liga MX giants are now the most successful team in the competition's history with seven titles, pulling one clear of Cruz Azul.

Andre-Pierre Gignac had given Tigres hope with his first-half goal, but they were pulled back as Michael Arroyo struck after the break.

Osvaldo Martinez, who set up his team's opener, sealed the win with a second-half penalty.

But not before Gignac scored six minutes before half-time to give the visitors hope.

Rafael Sobis' cutback found the former Marseille forward, who made no mistake with a finish into the bottom corner from around the penalty spot.

However, their chances of a comeback were dashed by substitute Arroyo.

Just three minutes after coming on, Arroyo brought down a Martinez pass on the left before cutting inside, eventually finding the bottom corner from 30 yards.

Victory was sealed in the 87th minute as Martinez stepped up to smash a penalty into the top corner.