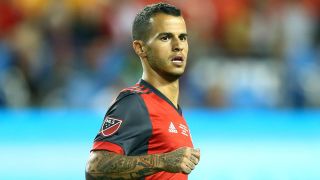 Sebastian Giovinco has won his first Italy call-up for three years, but Mario Balotelli has been left out of the latest squad.

Toronto striker Giovinco, who has 23 senior caps, has not featured in international football since October 2015, when he was a substitute in a 2-1 win over Norway in Euro 2016 qualifying.

The 31-year-old is joined in coach Roberto Mancini's latest squad by Sampdoria's Gianluca Caprari, who is called up for the first time, while Marco Verratti, Alessandro Florenzi, Patrick Cutrone and Danilo D'Ambrosio return.

Nice striker Balotelli has been omitted after a difficult start to the season in Ligue 1, as has Torino forward Andrea Belotti.

Italy face Ukraine in a friendly in Genoa on October 10, before they travel to face Poland in a Nations League match four days later.