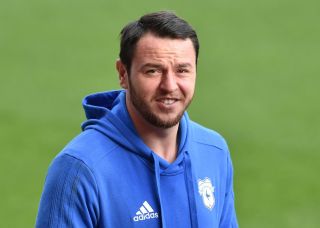 Lee Tomlin and Gary Madine will miss Cardiff’s pre-season tour of the United States because of visa issues.

PA understands the pair have had to stay at home due to America’s strict policy on visa applications.

Tomlin, 30, admitted affray in January 2017 and was ordered to perform 80 hours’ community service following an incident outside a Leicester nightclub.

Fellow striker Madine was given an 18-month jail sentence in 2013 for assaulting two fans in separate Sheffield attacks.

The 28-year-old spent four-and-a-half months in prison before being released.

The pair will now join the club’s under-23 squad for games in Devon and Cornwall, led by first-team coach Ronnie Jepson.

Tomlin and Madine are looking to rebuild their careers at Cardiff after struggling to be part of manager Neil Warnock’s plans in the Premier League last season.

They both spent the second half of last term out on loan, Tomlin at Peterborough and Madine at Sheffield United – the latter scoring three times as the Blades won promotion to the Premier League.

But Warnock has told the pair that they will be involved this season as Cardiff seek to bounce back to the top flight at the first attempt.

Cardiff were due to fly out to the US on Thursday and are set to play USL Championship teams San Antonio FC and New Mexico United.

The Bluebirds will then head to Canada and finish their three-match tour by meeting LaLiga side Real Valladolid in Edmonton.

Skipper Sol Bamba and Callum Paterson will continue their rehabilitation from injuries which saw their campaigns last season ended prematurely.

Defender Bamba tore a cruciate ligament in March and hopes to back at the start of October.

Scotland striker Paterson had ankle surgery in April and could be fit for the Sky Bet Championship opener at Wigan on August 3.