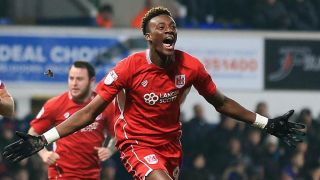 Huddersfield Town suffered a stunning 4-0 defeat away to struggling Bristol City in a huge dent to their hopes of securing automatic promotion from the Championship.

David Wagner's men missed the chance to close the gap on joint leaders Newcastle United and Brighton and Hove Albion, while City moved out of the bottom three after a dramatic night at Ashton Gate.

The hosts netted two goals in each half, Lee Tomlin opening the scoring on the half-hour mark before on-loan Chelsea striker Tammy Abraham scored in the 14th minute of first-half stoppage time – a head injury to Jonathan Hogg having caused a long delay early in the contest.

Aden Flint's goal and David Cotterill's penalty wrapped up only a third league win of 2017 for Lee Johnson's side.

Huddersfield, who had won their previous two games, subsequently remain six points behind the top two, both of whom play on Saturday.

Elsewhere, Sheffield Wednesday's play-off hopes suffered a blow as they went down to a 2-0 home defeat against fellow promotion contenders Reading.

Yann Kermorgant netted after 13 minutes and Adrian Popa sealed victory in the fifth minute of stoppage time after a breakaway.

It was a big win for Reading, whose goalkeeper Ali Al Habsi impressed, as they jumped above Leeds United into fourth with only a second victory in six games.

Wednesday's season is threatening to fall apart, though, with only four points collected from their last six matches.