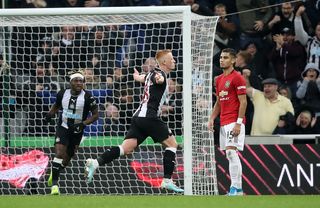 Newcastle head coach Steve Bruce has dismissed claims he is not picking midfielder Matty Longstaff because the midfielder is stalling on a new contract.

The 20-year-old signed a short-term extension last month to allow him to see out the elongated season following the expiry of his existing deal on June 30, but he has played for a total of just 35 minutes in two appearances since the return from lockdown.

Longstaff, who memorably marked his Premier League debut with the winning goal against Manchester United in October, did not even make it off the bench in Saturday’s 2-1 defeat at Watford.

Bruce played Switzerland international defender Fabian Schar in midfield at Vicarage Road, prompting suggestions that Longstaff was being frozen out.

However, asked about the situation at his pre-match press conference ahead of Wednesday night’s clash with Tottenham at St James’ Park, Bruce said: “Take the contract aside, I played Fabian Schar because of his physicality.

“That’s why I’ve played Fab in there. He’s played in that position for his country, who are eighth in the world. This debate that I’m not putting Matty in the team simply because of his contract, it’s not true.

“We’d all like Matty to stay and get things resolved, but the ball is in his court. But I’m certainly not picking a team with that in mind. I picked a team at Watford I thought could win the game.”

Newcastle have offered a new contract to academy graduate Longstaff but he is yet to sign it amid interest from Serie A Udinese among others.

Fellow Geordie Bruce, who elevated the youngster to the first-team picture after being impressed by him during a pre-season trip to China, is convinced remaining on Tyneside is the player’s best option and is desperate to keep him.

He said: “I gave the kid his debut. He had a thigh injury, unfortunately, when he came back from lockdown, which was a pretty severe one. I’ve treated him the way it should be.

“We’ve made him a huge offer, it’s up to the boy to commit himself. I’m not not picking him because he hasn’t signed a contract. We think a lot of Matty and the ball is in his court.”