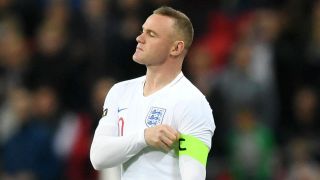 Wayne Rooney bade a fond farewell to England as an experimental Three Lions side coasted to a 3-0 friendly win over the United States at Wembley on Thursday.

Gareth Southgate's decision to give all-time leading goalscorer Rooney a cameo caused some pre-match controversy with record appearance holder Peter Shilton saying caps should not be "given out like gifts".

But, after being presented with a golden plaque prior to kick-off, he received a rousing reception and, as Rooney becomes a part of England's past, Southgate will be delighted by his glimpse into the future.

Debutant Callum Wilson then earned a deserved goal to round off the win in the second half on a decent night all round for England - one that would only have been made sweeter had Brad Guzan not denied Rooney in stoppage time.

England – noting eight changes from the team that beat Spain 3-2 in the Nations League – were nearly gifted the opener when Guzan's woeful clearance was quickly crossed to the near post by Sancho and skewed wide by Wilson.

Christian Pulisic was denied by Jordan Pickford after chasing his own throughball at the other end, but two goals in the space of 104 seconds killed the visitors' hopes.

Lingard opened the scoring in the 25th minute with a stunning bending effort from the left of the box into the top-far corner, before USA were overrun in midfield and Sancho played in Alexander-Arnold, who hit a fierce first-time strike across Guzan.

The tempo of the match dropped significantly after the break and it took the 58th-minute introduction of Rooney to bring Wembley back to its feet.

But the game was sewn up when Wilson was rewarded for a promising display by poking home Fabian Delph's teasing left-wing cross.

What it means: Southgate's faith in youth coming to fruition

Southgate has often stated his desire to select a team based on form, not age or reputation and his young stars were impressive at Wembley with Sancho a particular highlight. Wilson also showed signs that he can provide back-up to Harry Kane. Bigger tests undoubtedly lay in wait, but the manager can go home with a smile on his face.

Cub Sancho developing into a Lion

It is easy to forget Sancho is still a teenager such has been his rapid rise to prominence for Borussia Dortmund this season. This was the 18-year-old's first start in an England shirt but, on this evidence, many more are on the way.

USA are a team still in transition, but it was one of their elder statesmen, Guzan, who looked most out of place. His early error was followed by a penalty claim from Wilson against the former Aston Villa and Middlesbrough goalkeeper.

Next up: England face another Croatia showdown

Not for the first time in 2018, England face a boom-or-bust showdown with Croatia, the two having met in the World Cup semi-finals. It is a winner-takes-all scenario at Wembley with the victors making the final four of the Nations League after Croatia defeated Spain 3-2. USA face Italy on Tuesday.