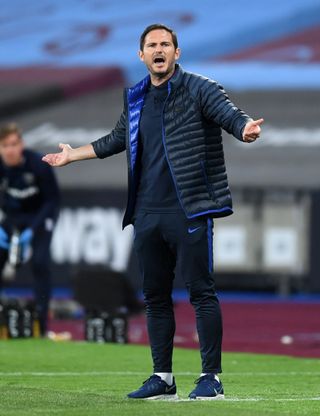 Frank Lampard insists he is not a “gung-ho” manager and has the answers to Chelsea’s defensive frailties.

The Blues slipped to a humbling 3-0 defeat at Sheffield United on Saturday, building the pressure for a top-four Premier League finish.

Chelsea host Norwich at Stamford Bridge on Tuesday with boss Lampard challenging his players to hit straight back to form.

While Lampard believes he can solve Chelsea’s defensive conundrum, he believes the era of stand-out partnerships like the Blues’ John Terry-Ricardo Carvalho pairing are a thing of the past.

“In terms of defensively, there is a way that I want us to play and it’s not gung-ho, it’s not crazy” said Lampard.

“A lot of the goals are the balls that come into our box that maybe we don’t defend right at that moment and that’s something that has to improve and I feel I know the answers to it.

“Some of it is work and that’s something we will see and it’s part of the process we are in. I don’t like it, I hate conceding goals but we have to work harder on it.

“I don’t think any team in modern football are going to say ‘We’ve got that one defensive partnership’.

“You go back and talk about a John Terry-Ricardo Carvalho partnership, but in the modern day, I don’t think you will find too many clubs to name the two.

“It’s a difficult season and a demanding season, so I’m not saying I just want to pick two centre-backs because you need competition of probably four centre-backs within a squad and then you need them knocking on the door.

“You want to be able to say to players ‘You are not doing enough’ or the two that are playing keep deserving to play.

“I don’t think it’s about just a partnership. Can we be more settled if we improve? Yes, for sure.

“Will it be just two players who are going to be your centre backs? I don’t think that’s going to be the case.”

Chelsea can still secure Champions League football for next season, with league matches at Liverpool and against Wolves to follow Tuesday’s clash with already-relegated Norwich.

And Lampard has told his players not to “wallow in a pit” after Saturday’s hefty loss to the Blades.

“I do expect a reaction and that’s between them,” said Lampard.

“That’s my job but it’s between the players. They would have felt that on the pitch.

“There are two different types of defeat. There’s a defeat against West Ham where it’s a game we dominate but we make mistakes and it’s a game I feel we really should win.

“Then there’s the game with Sheffield United where they were better than us.

“I always felt that with the squad we have, with the players who were on loan in the Championship and are young, that there will be tough times this season.

“It’s important not to wallow in a pit of ‘Oh my God, we lost 3-0 at Sheffield United’. The important thing now is how we react and I expect that from the players tomorrow.

“They need to show the quality they’ve shown for big parts of the season. I trust they will do and because we’re at the business end it’s very important that they do.”