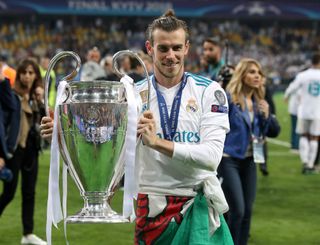 Gareth Bale has set his sights on silverware after returning to Tottenham on loan from Real Madrid.

The 31-year-old rejoins Spurs on a season-long deal seven years after he moved in the opposite direction in a then world-record transfer.

He went on to stock his medal collection with four Champions Leagues, two LaLiga titles and a Copa del Rey triumph among others, and is determined to now bring success to the club where he first established himself as a world-class talent.

✍️ We are delighted to announce the return of @GarethBale11 to the Club on a season-long loan from Real Madrid!#BaleIsBack ⚪️ #COYSpic.twitter.com/6w8P1CLx61— Tottenham Hotspur (@SpursOfficial) September 19, 2020

“I think by going to Madrid, winning trophies and going far with the national team I feel like I have that kind of winning mentality, how to win trophies,” said Bale, a Euro 2016 semi-finalist with Wales.

“You don’t realise it until you’re there and in those situations, in finals, know how to deal with the situation, the nerves, the pressure, and I think that all goes with experience.

“Hopefully I can bring that to the dressing room, bring a bit more belief to everybody that we can win a trophy, and the target is to do that this season, to be fighting on every front possible. I want to bring that mentality here, back to Tottenham.

“It’s an exciting time for everybody here, the club continues to progress every year and I want to contribute to that again and try to get us to the next level, which is winning a trophy.

“It’s such an important thing for this club, to win trophies. As players, we want to win trophies in our careers, and to be doing it at Tottenham now would be a dream come true.”

Spurs’ last prize was the 2008 League Cup, with two more finals in that competition since as well as four FA Cup semi-finals and a runner-up finish in the 2016/17 Premier League.

The club confirmed Bale would not be match fit until after October’s international break, having sustained a knee injury while on international duty earlier this month.

Bale, who will wear the number nine shirt, said in an interview posted on Tottenham’s Twitter feed: “It’s nice to be back. It’s such a special club to me. It’s where I made my name and what an amazing club, amazing fans.

“It’s just incredible to be back and hopefully now I can get some match fitness and get under way and really help the team, and hopefully win trophies.

To all the Spurs fans, after 7 years, I’m back! #COYS@SpursOfficialhttps://t.co/NbAaUWefQPpic.twitter.com/zGk37PnQe9— Gareth Bale (@GarethBale11) September 19, 2020

“I always thought when I did leave that one day I would love to come back. The opportunity now has arisen and I feel like it’s a good fit.

“I feel like it’s a good time for me. I’m hungry, I’m motivated, I want to do well for the team and I can’t wait to get started.”

Left-back Sergio Reguilon has also made the move from Madrid to north London, sealing a permanent transfer.

The Spaniard, who spent last season on loan at Europa League winners Sevilla, has signed a five-year contract at Spurs. Madrid have inserted a buy-back clause into the deal.

He developed into a world-class player and was sold to Real for £85million, but a successful spell turned sour for him in the final couple of years as he fell out of favour under Zinedine Zidane and was subject to heavy criticism over his perceived preference to play golf rather than perform on the pitch.

His return to Spurs means that boss Jose Mourinho finally gets his hands on a player he has tried to sign twice in the past, first when he was at Real and then again at Manchester United.

And his arrival into Mourinho’s Spurs squad could not be more timely as they have laboured in their opening two games of the campaign.

They were totally devoid of any attacking threat in a 1-0 Premier League loss to Everton before needing two goals in the final 10 minutes to beat Lokomotiv Plovdiv 2-1 in Europa League qualifying.