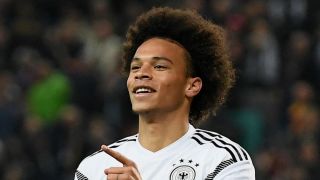 Leroy Sane showed Germany what they were missing at the World Cup as he scored his first goal for his country in a comfortable 3-0 friendly win over Russia on Thursday.

The Manchester City winger, who was controversially left out of Germany's squad before their shambolic title defence at Russia 2018, slotted home Germany's early opener and tormented Stanislav Cherchesov's side with his pace as Die Mannschaft cantered to a morale-boosting victory.

Joachim Low's men went into the game on the back of consecutive Nations League defeats to Netherlands and France but further first-half goals from Niklas Sule and Serge Gnabry put the game beyond the visitors.

The result was a welcome one for the beleaguered Low but he is unlikely to enjoy such a strong performance for long if his men fail to embark on a spell of form and avoid Nations League relegation.

Russia fielded an understrength side after Cherchesov's squad was hit by a spate of injuries including a muscle strain to World Cup star Denis Cheryshev, and they failed to threaten a first ever win over their hosts.

It took Germany just eight minutes to split the Russia defence, Joshua Kimmich playing the killer pass into the box where Gnabry squared it neatly to Sane, who stroked a low shot into the bottom-left corner.

The second came from a Kimmich corner that was flicked on by Antonio Rudiger and the ball fell to the feet of Sule, who side-footed home as the Russia defence stood static.

Gnabry made it 3-0 five minutes before the interval, applying a clinical first-time finish from just inside the box after Kai Havertz fed him a simple throughball and Russia failed to track his run.

Russia improved in the second half and Aleksey Ionov should have pulled one back when he was put clean through on goal only to fire narrowly wide.

Germany held firm but their outing was marred by an ankle injury to Jonas Hector, who was the victim of a dangerous challenge by Aleksandr Erokhin.

What does it mean? Relief for Low – for now

The result will help Germany boss Low to bury the memory of a torturous year in which he only just clung to his position after a dismal, scandal-strewn World Cup, but he must extend this form in the Nations League to avoid relegation.

Manchester City coach Pep Guardiola has been singing Sane's praises for his outstanding league performances and if any Germany supporters doubted whether he could translate them onto the international stage, those concerns were allayed with aplomb.

Erokhin lucky to stay on

Erokhin was shown a yellow card for his tackle from behind on Hector that forced the Cologne defender out of the game but on another night it might have been red.

Germany entertain Netherlands in the Nations League on Monday, seeking revenge for their 3-0 reverse in October, while Russia travel to Sweden hoping to improve on a goalless draw against Janne Andersson's men in their last meeting.