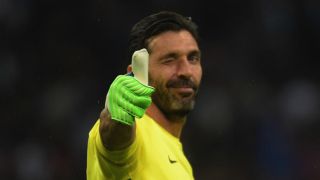 As Gianluigi Buffon continues to be linked with a move to Paris Saint-Germain, the goalkeeper's former Italy team-mate Thiago Motta has backed the transfer.

Buffon is a free agent after ending a 17-year spell at Juve at the age of 40, the veteran indicating he has a choice of offers if he decided to play on.

PSG are reportedly ready to offer Buffon a two-year deal and Motta, who has just retired after a six-and-a-half-year spell with PSG as he prepares to coach the club's youth team, is hopeful of a reunion.

"Gigi is a sincere and honest person," Motta said to Le Parisien. "You just have to be clear with him from the beginning.

"For my part, I wish he'll come to PSG. Age is not important. If he comes, it's because he feels ready to come. He knows himself very well.

"And I think if he comes, it's because he has a huge motivation in mind. I don't know which one. But maybe it's winning the Champions League...

"Gigi Buffon is a huge personality. A top winner. If he comes here, everyone will understand him. He is a very positive person. With the experience he has today, at his age, he can bring on and off the field. I think it's a very good idea.

"After, there are many things to consider, and first of all the goalkeepers currently serving at PSG. Alphonse Areola played all season and showed that he was a top goalkeeper. Now things are in the hands of Gigi, the club and the coach."

New PSG coach Thomas Tuchel demurred when asked about the prospect of signing Buffon at his unveiling.

"I cannot answer that question," Tuchel told reporters. "However, I am struggling to come to terms with the idea that he will not be in goal for Juventus or Italy.

"Behind this type of athlete, there is always a great personality. I do not know him personally. We'll see what happens."