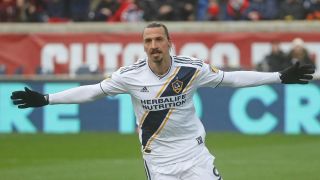 Zlatan Ibrahimovic has rejected speculation he could end his MLS adventure early and return to Europe, insisting he is committed to current club LA Galaxy.

Ibrahimovic moved across the Atlantic in March after Manchester United agreed to terminate the striker's contract early, the former Sweden international having returned from a knee ligament injury.

He made an immediate impact with a brace on his debut against Los Angeles FC and Ibrahimovic went on to score 22 goals in his maiden MLS season.

It was not enough to get the Galaxy into the play-offs, though, as they missed out to Real Salt Lake after a dramatic final round of fixtures.

Ibrahimovic was subsequently linked with a return to former club AC Milan, but he has dismissed reports he will come to the aid of the Rossoneri.

"The fans deserved more...We didn’t give back to them and I feel sorry for that because they absolutely deserve more than they got." - November 6, 2018

"It's no secret, there is interest from Europe. Absolutely, but my priority is Galaxy. I am here and I'm happy to be here," he told the club's official website.

"The club knows all my wishes, all my demands. It's up to them what they want, but they are very positive. They have been very good to me.

"They have been very helpful, they help me and my family with whatever I need. I have a good relationship with everybody. Let’s say I'm not worried."