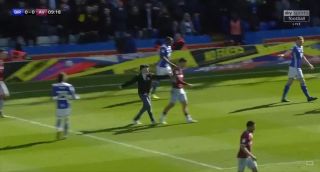 Aston Villa midfielder Jack Grealish was punched by a pitch invader during his side’s derby clash at Birmingham on Sunday, while Manchester United’s Chris Smalling appeared to be pushed by an Arsenal fan.

Grealish was struck on the head early in the match, but went on to score the winner in Villa’s 1-0 win while his attacker was arrested by West Midlands police.

A man was also arrested in London as Smalling appeared to be pushed after his side conceded the second goal in their 2-0 defeat at Arsenal.

The assaults were the latest examples of crowd trouble which has blighted English and Scottish football in recent weeks and, here, Press Association Sport takes a look at the unsavoury incidents.

Kilmarnock manager Steve Clarke was targeted with sectarian abuse during his side’s 5-0 William Hill Scottish Cup defeat by Rangers. Chants of “sad Fenian b*****d” echoed round Ibrox during the February 20 clash and afterwards Clarke accused the Rangers support of living in the Dark Ages. He added: “What are we doing in Scotland?”

A glass bottle was thrown from the Hibernian support as Celtic winger Scott Sinclair prepared to take a corner during a Scottish Cup match at Easter Road on March 2. Referee Willie Collum had to remove the bottle before play resumed, while a flare was thrown on the field after James Forrest’s opening goal in Celtic’s 2-0 win. Celtic interim boss Neil Lennon condemned the incident as “totally unacceptable”.

Sheffield United defender Jack O’Connell had a coin and a plastic bottle thrown at him from the crowd as he prepared to take a throw-in during the goalless Championship draw at Sheffield Wednesday on March 4. Blades boss Chris Wilder condemned the derby atmosphere, saying: “It’s gone pretty hostile now and I don’t think anybody wants to see that. I’m disappointed it’s gone that way and you can’t really do a lot about it.”

In their Ladbrokes Premiership match at Hibernian on Friday, Rangers captain James Tavernier was confronted by a man who had leapt from the same stand as the bottle was thrown against Celtic. As Tavernier bent down to pick up the ball on the stroke of half-time, the pitch invader booted the ball from his hands before being quickly led away after squaring up to the Englishman. A 21-year-old man was arrested and Hibs chief executive Leeann Dempster refused to rule out closing sections of Easter Road in the wake of the incident.

Grealish was punched in the side of the head by a spectator who ran on to the pitch inside the opening 10 minutes at St Andrew’s. The intruder was quickly restrained by stewards as several other Villa players rushed in to confront him and he was led away by police, blowing kisses to the crowd as he left. He was later arrested and is set to be banned from Birmingham’s ground for life.

Arsenal moved swiftly to confirm a man had been arrested for appearing to push the United defender in the wake of the home side’s second goal in a 2-0 win at the Emirates.

The invader ran on the field and then towards Smalling, before continuing his intrusion and ultimately being dragged out.