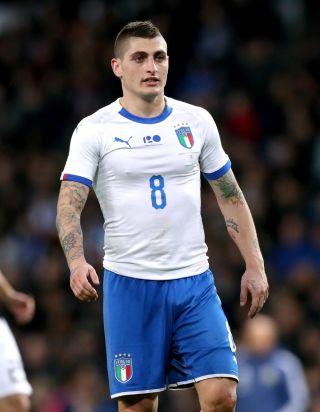 Italy posted a second successive win at the start of their Euro 2020 qualifying campaign by brushing aside Liechtenstein 6-0 in Parma.

Fabio Quagliarella became Italy’s oldest international goalscorer at 36 when he converted the first of two penalties.

Liechtenstein played the second half with 10 men after Daniel Kaufmann was sent off for conceding the second spot-kick, but Italy had already inflicted too much damage as Quagliarella’s successful conversion made it 4-0.

Stefano Sensi and Marco Verratti had set the Azzurri on their way, while Juventus star Moise Kean added a fifth 20 minutes from time and debutant Leonardo Pavoletti completed the scoring.

Italy manager Roberto Mancini made seven changes, including a senior debut for Atalanta defender Gianluca Mancini, while Quagliarella made his first Azzurri start since 2010.

And Italy, fresh from defeating Finland 2-0 in their opening qualifying game, never looked back after Sassuolo’s Sensi opened their account with a powerful header after 17 minutes.

Liechtenstein, ranked 181st in the world and with just two wins from their last 31 games, continued to find themselves under pressure as Verratti fired a shot just over the bar.

But the Paris St Germain player was not to be denied 14 minutes before half-time when he beat a number of defenders before finding the target for a superb solo goal.

And before Liechtenstein could regroup, they fell further behind, conceding a 35th-minute penalty that Quagliarella converted. It meant 18 successive Italy goals had been scored by different players, a run stretching back to June 2017.

Nicolas Hasler conceded the penalty for handball, but the visitors did not learn their lesson and gave away another spot-kick during the dying seconds of a one-sided half.

This time, Kaufmann was the culprit – although the ball seemed to hit his shoulder – and was sent off while Quagliarella once again found the net, making it 4-0.

The game won, Italy cruised through the second period as Kean and Pavoletti sealed an emphatic success.