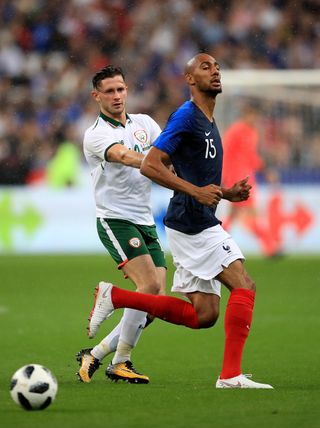 Alan Browne has admitted the Republic of Ireland did not do themselves justice in the last 12 months of Martin O’Neill’s reign.

That game brought down the curtain on a dreadful calendar year which saw his side win just one of its nine games, a 2-1 friendly victory over the United States, and score only four goals in the process.

Mick McCarthy replaced him and Ireland won their opening two Euro 2020 qualifiers against Gibraltar and Georgia in March, and Browne is hoping to take that momentum into next month’s clashes with Denmark and the Gibraltarians.

He said: “Looking from the outside, it looked probably really bad. But this is a new year now and a new chance for everyone to prove themselves again and hopefully get the Irish fans back on our side because I don’t think we have probably done ourselves justice in the last year or so.

“It’s been disappointing and a bad reflection on us, so it’s up to us now to kind of turn it around again and get goals as well as clean sheets.”

Browne is yet to make a competitive appearance for his country with each of the 24-year-old’s three senior caps to date having come in friendlies against Mexico, Turkey and France.

The last of those games saw Ireland lose 2-0 in Paris as Didier Deschamps’ men finalised preparations for their ultimately successful World Cup campaign, and the Preston midfielder was able to experience at close quarters exactly what it takes to mix it with the best.

He said: “Every game you play at international level is really tough and I soon found that out. But the France game was a totally different ball game.

“You could obviously see why they went on to become world champions. They’re a top-class side all over the pitch and every one of them is obviously playing at the highest level they can.

“We have a lot of Championship players and some League One players, so to be competing with that is a lot to ask, to be honest.

“But we’ve obviously got a few promotions this year and they’ll get some Premier League experience, which I’m sure will bode well for them going into the international set-up – and hopefully there will be a few more go up as well (via the play-off final).”