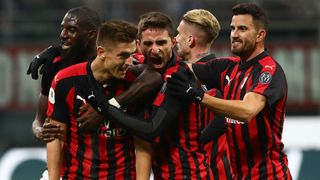 Krzysztof Piatek promised AC Milan fans there was plenty more to come from him after scoring twice on his first start for the club in the 2-0 Coppa Italia quarter-final victory over Napoli.

After making his debut off the bench in the 0-0 Serie A draw against Napoli last weekend, striker Piatek capitalised on the opportunity to play from the start against the same opponents in Coppa Italia action on Tuesday.

The Poland international demonstrated his finishing abilities when grabbing both goals in the last-eight tie at San Siro, keeping Milan on course for a third final appearance in four years.

After joining from Genoa, the 23-year-old is confident he can continue to score goals for the Rossoneri, who paid out a reported fee of €35million to fill the void left by Gonzalo Higuain's departure.

"I expected a night like this. I said that I was ready and I got a brace, but this is just the start," Piatek told Milan TV.

"Both goals were great, even if they were different. Before the game I spoke to Diego Laxalt and Fabio Borini, asking them to give me the ball high and long, because I prefer it that way.

"On the second goal, I had to take on [Kalidou] Koulibaly, but it went well. I am already thinking about the next game with Roma and hope the rapport with my team-mates is even stronger by then.

"I felt good tonight and it was marvellous playing at San Siro."

Gennaro Gattuso felt Piatek was the difference between the teams – and the Milan boss was particularly impressed with the striker's second goal.

Having curled home the opener, Piatek showed excellent awareness to keep possession away from centre-back Koulibaly when cutting in from the left before unleashing a shot that flashed beyond Napoli goalkeeper Alex Meret.

"That second goal was incredible," Gattuso told Rai Sport. "He is an amazing striker and we are happy to have him on our side that's for sure.

"Everyone did well today but Piatek was a difference maker."