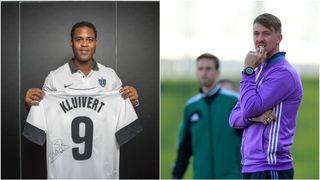 St Mirren chairman Gordon Scott has played down speculation the newly promoted Scottish Premier League side could appoint Patrick Kluivert or Guti as their next manager.

The Buddies have been on the search for Jack Ross' replacement since last month, when the 41-year-old joined League One outfit Sunderland.

A host of names have been linked with the role, including Champions League winners Kluivert and Guti – who was also said to be in the running for the vacant Real Madrid position.

But Scott says the duo are unlikely to be considered despite their high-profile playing careers at some of the top clubs across Europe.

"I wouldn't rule them out completely but I think it's unlikely," Scott told Sky Sports News.

"Anybody who comes in needs to know Scottish football. It's different for sides like Celtic and Rangers who can bring in players from all over the world, but we need to focus on the Scottish market and the English market to a degree."