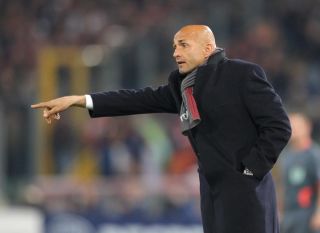 Inter Milan boss Luciano Spalletti hailed his players for holding their nerve after they qualified for the Champions League by beating Empoli 2-1 on the final day.

Inter sealed a top-four finish at the expense of city rivals AC Milan, while Empoli were relegated to Serie B.

“We played a good game, even if the added pressure, considering the importance of the match and the weight of the Nerazzurri shirt, inevitably had some influence,” Spalletti told a post-match press conference.

“It was a time to show heart and everyone did. It wasn’t easy, but the guys were exceptional, especially after their equalising goal.

“I was sorry to play what was essentially a knockout game against Empoli, who had a great game and they would have deserved to stay up.

“But Inter played the game that Inter needed to play and we never gave up until the final second and only our mental state put us back on track.”

Inter striker Mauro Icardi’s second-half penalty was saved, team-mate Marcelo Brozovic’s stoppage-time goal was chalked off by the video assistant referee and both sides had a player sent off in stoppage time.

Empoli’s Filippo Perucchini was shown a straight red card for remonstrating with the referee and Keita was shown his second yellow card in the seventh minute of time added on.

Atalanta, Inter, Milan and Roma were locked in a four-way fight for two places at Europe’s top table heading into the final round of Serie A fixtures.

But victories for Atalanta and Inter meant Milan and Roma were unable to muscle in on the top four, despite ending the season with wins of their own.

“I expected a match like that because the race for the top four had already suggested that it would go to the final day,” Spalletti added.

“The team achieved the objective that was set in advance and our guys deserve to be congratulated.”