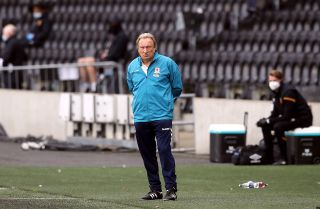 Middlesbrough manager Neil Warnock says it will take a “miracle” for him to mount a promotion challenge next season.

Warnock has taken the permanent job at the Riverside after saving Boro from relegation, completing a nine-game rescue mission at the end of the last campaign.

The 71-year-old is looking to repeat the trick he performed at both QPR and Cardiff, who he saved from the drop before steering them into the Premier League the following season.

That is the aim at Boro, but Warnock reckons it is his toughest ask yet.

“It would be a miracle to do something like that,” he said. “But I look back at where I’ve been and what I’ve done. QPR and Cardiff were very similar.

“I do back myself against anybody. It’s just a massive challenge.

“It’s the sort of job I like to look forward to and see what I can do. There are many aspects I’d like to change and see if I can come up with an answer.

“I’m not a magician but it won’t be through lack of trying.”

It is the third time he has come out of ‘retirement’, having been tempted back to Rotherham in 2016 – a spell that reignited his passion for management.

His wife Sharon and family still live in Cornwall, but she is happy for him to take a job he has always coveted.

“I wouldn’t say I got on her nerves because of the virus,” he said. “I have tried to not splash so much when I wash the pots and I have plumped the cushions more and made the bed occasionally, though when I make it she has to make it again.

“She also knows the number of times I’d love to show the owner here what I can do.

“I’ve been very close and always looked from afar. I always work better when I’m working for someone who I want to show how good I am.

“I want to show Steve Gibson what I can do.

“It’s nice that he’s given me the opportunity and nice that Sharon has let me do it.”

Warnock has already made his first signing, bring Grant Hall to the club, while he also confirmed he has offered new contracts to George Friend and Marvin Johnson.