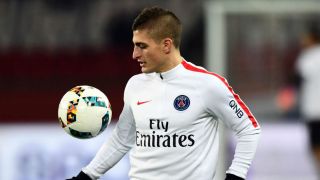 Paris Saint-Germain will have to make do without influential midfielder Marco Verratti when they host Ligue 1 leaders Monaco on Sunday.

The Italy international picked up an injury in training on Friday, reportedly to his calf, and head coach Unai Emery confirmed in his media conference on Saturday that he was ruled out.

PSG head into Sunday's game in third, three points behind Monaco and one adrift of Nice, who host Guingamp earlier the same day.

Verratti's absence is undoubtedly a blow for PSG, but Emery insists he has the squad depth to cover for the 24-year-old.

"We want to maintain the spirit of the team with one player or another. We work as a team," he said.

"It is up to the others to keep the team. [Adrien] Rabiot is ready to play in the position of Verratti. He is different, he has other capabilities, some small differences, but not that much.

"[Blaise] Matuidi and Verratti are very different, yes. Rabiot and Verratti less than that. Throughout the year, there may be injuries... that's why we need a prepared team and competition.

"I am pleased with the work of the club that has improved the workforce."

Javier Pastore, who has been sidelined since November with a knee problem, is not yet ready to return.