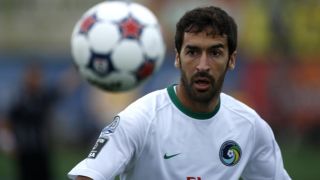 Real Madrid great Raul went out a winner as his New York Cosmos clinched the Soccer Bowl with a 3-2 win over the Ottawa Fury.

The 38-year-old, a multiple La Liga and Champions League winner with Real, played a full game in the Cosmos' win.

Raul set up his side's third goal with a delicate flick as Gaston Cellerino completed his hat-trick and wrapped up the Cosmos' win.

While Raul was the man of the moment, Cellerino was the undoubted hero as he delivered for the Cosmos, who also sent out Marcos Senna a winner.

He opened the scoring in the eighth minute.

Cellerino kept his feet under pressure from the Ottawa defence and scored under goalkeeper Romuald Peiser.

Cellerino should have doubled the lead in the opening minute of the second half.

Walter Restrepo was released down the right side of the area before crossing, but the reaching Cellerino blazed over from close range.

The game came to life in the final half-hour.

Mason Trafford was sent off for the Fury in the 68th minute after a two-footed stamp on Sebastian Guenzatti.

Raul had given away possession around halfway before Tom Heinemann was played in behind, finishing smartly past Jimmy Maurer.

The Cosmos retook the lead just a minute later.

Restrepo beat his marker down the right before chipping to the back post, where Cellerino scrambled in.

Raul set up Cellerino in the 85th minute as the Spain great went out in style despite a late goal from Heinemann.