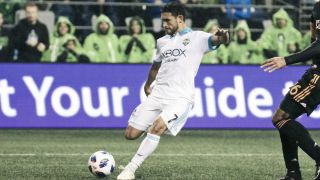 Seattle Sounders moved a step closer to clinching a play-off berth courtesy of a crushing 4-1 win over Houston Dynamo in MLS.

The Sounders boosted their post-season chances thanks to goals from Will Bruin and Cristian Roldan, while Victor Rodriguez's late double sealed Monday's comfortable victory.

Seeking their 10th consecutive play-off appearance, Seattle opened the scoring via Bruin in the 18th minute – the former Dynamo forward's shot finding the top corner of the net.

A swift counter-attack saw the Sounders double the lead after the half-hour mark when Roldan fired a shot across Dynamo goalkeeper Joe Willis at CenturyLink Field.

Spanish midfielder Rodriguez added some gloss to the scoreline with two goals in nine minutes before Houston captain DaMarcus Beasley netted a consolation three minutes from the end in Seattle.

The Sounders are fifth in the Western Conference and six points inside the top six, which guarantees a play-off spot, while the Dynamo – already eliminated from the post-season picture – are 10th.