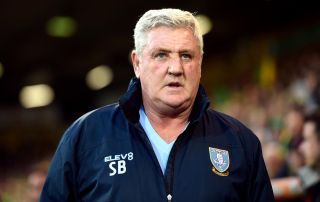 Bannan opened the scoring in the 17th minute with stunning strike into the top corner from 25 yards that left Max O’Leary with no chance.

The Owls doubled their lead in the 39th minute when Bannan clipped a delightful ball behind the City defence to Lucas Joao, who calmly lifted the ball over O’Leary and into the back of the net.

The Robins fought hard in the second half but could not pull a goal back. Famara Diedhiou and Josh Brownhill came close, but both saw their efforts stopped by Cameron Dawson.

Bruce said: “I couldn’t wish for anything more from them. There were a lot of tired bodies. We had a few mistakes towards the end but overall, I was able to make the changes and freshen the side up and it paid off.

“I don’t think you’re going to get a couple of goals as good as that in any league so I’m obviously very pleased.

“In the first half we looked a very decent team. The second half became a bit pedestrian and Bristol were throwing themselves at us.

“Barry is a very good footballer and going forward, you always want your good players. He’s been here a few years and made himself a crowd favourite and to be a favourite at a big club like this you must have ability and he’s got it in abundance.”

Bristol City head coach Lee Johnson praised his players’ efforts but was disappointed his team could not capitalise on their opportunities.

Johnson said: “It’s disappointing, definitely an opportunity missed. We thought we could have taken the game to Sheffield Wednesday, but we didn’t do enough in the first 15 minutes.

“We weren’t bright enough, we weren’t sharp enough and we couldn’t stop Bannan dictating things. But after that I thought we were the better side that played the better football.

“We can’t keep giving ourselves a mountain to climb by gifting the opposition the first 10 minutes.

“I couldn’t fault the players’ attitude, energy and will to win but unfortunately we didn’t demonstrate the composure and quality to take the chances that we had.

“We were trying to win from the start. We wanted to win the game, at half time I wanted a couple to raise their intensity, which they did, but we didn’t have that killer instinct.”