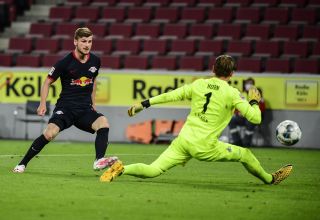 Timo Werner took his Bundesliga season tally to 25 as RB Leipzig moved back up to third place with a 4-2 away victory against Cologne.

Werner put the visitors 3-1 ahead five minutes after the break and the scoring was completed seven minutes later.

The home side were left completely exposed from their own attacking set-piece when goalkeeper Peter Gulasci caught a cross and launched a kick downfield for Werner to run on to, and the striker made no mistake.