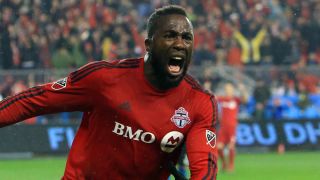 Jozy Altidore's 60th-minute strike was all that separated the two sides as Toronto sealed a 1-0 aggregate triumph and successive championships in the east on Wednesday.

However, 2017 Supporters' Shield winners Toronto will have another opportunity to make amends, despite Victor Vazquez's unsuccessful penalty in the first half.

Altidore and Sebastian Giovinco were absent for the fixture at the Crew due to suspension, but the star pair made timely returns midweek.

Vazquez saw his 26th-minute penalty saved by Zach Steffen but Altidore came to Toronto's rescue on the hour – the United States international running on to a pass from the former before finishing powerfully past the Crew goalkeeper.

With the Crew only requiring an away goal to deny Toronto a place in the final, Columbus had a great chance to silence the hosts but an unmarked Ola Kamara was unable to get a touch on a cross with the goal at his mercy.