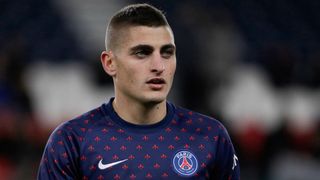 The Italy international resumed training on Monday after missing the last three matches with an ankle injury.

Tuchel is prepared to play the midfielder in the cup trip against their third-tier opponents, provided he comes through their latest practice session unscathed.

"We have to decide today [Tuesday] if it's possible for him to play again," he told a news conference.

PSG will definitely be without Neymar, who is out for 10 weeks with a foot injury, and his absence coincided with their first Ligue 1 defeat of the season against Lyon last Sunday.

Come back soon Ney! We can't wait to see these skills back out on the pitch

Despite missing the Brazil star's creativity, Tuchel has ruled out asking Kylian Mbappe to adapt his game and try to fill in for his team-mate.

"I don't want Kylian to play like Neymar and keep the ball," he said. "Kylian is incredibly dangerous in the final move and I want him to stay that way."

Tuchel expects his senior players to make sure PSG do not show any complacency against Villefranche, who knocked out last season's surprise finalists Les Herbiers in the last round.

"I expect a match with great domination and possession of the ball. They're going to want to play on the counter-attack. We must play with seriousness and vigilance," he said.

"It's a decisive match, we definitely want to win and it's our responsibility to win.

"We have experienced players like Gianluigi Buffon, Dani Alves and Thiago [Silva]. They play every match with the same state of mind."