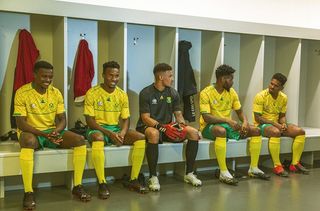 Bafana Bafana and Lecoq Sportif have launched their first-ever kit ahead of their international friendlies against Namibia and Zambia this week.

Molefi Ntseki recently named his 25-man squad for their upcoming international friendlies against Namibia and Zambia at the Royal Bafokeng Stadium in Rustenburg.

The South African national team will take on Namibia in their first friendly match on 8 October before facing Zambia three days later on 11 October 2020.

Here is the new kit:

Bafana Bafana will play Namibia on Thursday in the new Jersey. pic.twitter.com/EaUmNDDb2QOctober 5, 2020

It is finally here, the moment you have all been waiting for. SAFA and le coq sportif are pleased to present the new Bafana Bafana jersey for the 2021 season.Visit our online store to be one of the first to pre-order your very own jersey. ⚽@JackDevero#soccer pic.twitter.com/vrH0r3JEuyOctober 5, 2020