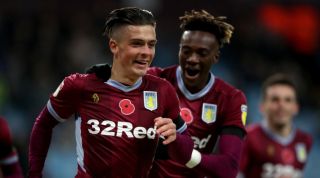 Still just 21, Abraham burst onto the scene in 2016/17 when he scored 19 Championship goals for Bristol City while still a teenager.

The Chelsea loanee earned his chance in the Premier League the following season, but with a Swansea side that was tumbling down the table.

Swans fans never really saw the best of Abraham, but the youngster has rediscovered his scoring boots at Aston Villa with 11 league goals in 14 outings already this season – four of which came in last month's madcap 5-5 draw with Nottingham Forest.

When Stoke ended a decade's stay in the top tier, it seemed incomprehensible that Allen would stay put in the Potteries.

The Welshman had been selected in Euro 2016's Team of the Tournament and had 132 appearances for Liverpool to his name, so the midfielder shocked everyone when he signed a new four-year contract at the Bet365 Stadium in June.

Allen is now 28 and in the thoeretical prime of his career. If – or more like when – Stoke aren't promoted this season, the Premier League may beckon once again.

Another young loanee pulling up trees in the EFL, Barnes hasn't yet turned 21 but looks set for a long and successful career at the top.

A product of the Leicester academy and currently on loan at West Brom, the attacking midfielder has seven goals and three assists so far in 2018/19 and his impressive performances won't have gone unnoticed at the King Power Stadium. Earlier in the season, rumours suggested that Claude Puel might recall him for his Foxes cause in January.

If reports are to be believed and Daniel Levy had been willing to budge on price, Grealish could already be playing in the Premier League with Tottenham.

Villa fans will be glad he didn't, but will also be very aware that the midfielder will likely be strutting his stuff there with or without them soon.

A product of the youth system at Villa Park, Grealish may have taken a little longer to realise his full potential than many predicted, but now the 23- year-old is combining talent and consistency in his preferred No.10 role behind the striker.

Like Abraham, Mount is a Chelsea youngster on loan in the Championship, but unlike his under-23s team-mate is yet to be given a chance in the Premier League.

The 19-year-old is unlikely to have to wait much longer, though – after winning Vitesse Arnhem's player of the year award last term, the England Under-21 international has carried that form to Derby.

Under the management of Blues legend Frank Lampard, Mount has been integral in the Rams' push towards the play-off places.

West Brom joined Stoke in getting relegated last season, and it would have been no surprise if Hegazi had been poached by a top-flight side.

While Jonny Evans got his move to Leicester, it was probably underestimated just how much the Egyptian contributed too. Even though the Baggies finished rock bottom in 2017/18, they had a defensive record better than seven teams above them.

Hegazi was largely an unknown entity outside of his country, having endured three torrid years in Italy in his only previous move abroad, but he quickly made a big impression at The Hawthorns and his physical style is ideally suited to English football.

This is the 15th consecutive season that Leeds have now spent outside the Premier League, but under Marcelo Bielsa there is belief that this could be their year to return to the big time.

Bielsa is the fourth Leeds manager that Jansson has played under, despite only arriving at Elland Road in July 2016, but the defender has been ever-present under all of them.

The 27-year-old Sweden international is a dependable figure who is just as comfortable man-marking a burly forward as he is playing in Bielsa's intense and technical system.

Another from the Potteries who was tipped to remain in the Premier League following Stoke's relegation, Butland was also convinced to stay - for the time being at least.

Jordan Pickford may now be England's undisputed No.1, but going into the World Cup it was a straight fight for the position between Butland and the Everton goalkeeper.

Southampton's Alex McCarthy has also moved ahead of the 25-year-old in the pecking order, and Gareth Southgate warned Butland in September that such disappointment will likely continue while he remains a Championship player. "We feel it's important at this moment to keep faith, but he's going to have a challenge to stay in the squad," noted the Three Lions chief.

It's hard not to reflect on Rodriguez's career and imagine an alternative reality. What if he hadn't suffered an anterior cruciate ligament injury just a few months after his first (and only) England cap? What if he hadn't missed the entire 2014/15 season as a result, as his Southampton team-mates went on to bigger and better things?

Sadly we'll never know, but now at West Brom, Rodriguez is trying to make up for lost time.

The forward already has nine goals and two assists this campaign, having also been one of their few bright sparks last season. Rodriguez will turn 30 next summer, but the Premier League isn't beyond him.

Watkins has enjoyed a steady but impressive rise during his budding career. After coming through the ranks at Exeter, the 22-year-old broke through during the 2015/16 season with nine goals in 22 matches from his position on the left wing.

An even better campaign followed as Watkins won the EFL Young Player of the Year prize - previously bestowed upon Gareth Bale and Dele Alli - and Brentford duly came calling.

The forward made the step up from League Two to the Championship seamlessly, and rumours continue to abound that top-flight clubs are watching with keen interest.