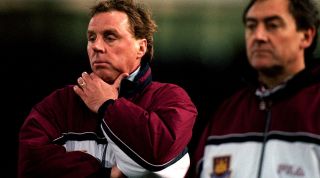 England had already been caught with their pants down by Germany at the 2010 World Cup, but to add insult to incompetence, the players returned to their Rustenburg hotel to find out that their smalls had gone walkabouts too.

2. Andy’s return of the Mac

It’s safe to say Andy van der Meyde had enjoyed better weeks when, shortly after having his drink spiked, thieves broke into his house and carted off with a Ferrari, a Mini Cooper, eight Rolex watches (yes, eight!) and a dog called Mac.

The thieves then demanded a £5,000 ransom for the pup. “We only report a dog stolen if we have a crime reference number,” barked the Missing Pets Bureau. Thankfully, dog and owner were reunited three days later.

Harry Redknapp’s Christmas cheer went out of the window when a 1995 invoice demanding payment for a Yuletide night that had got slightly out of hand was nicked from the then-West Ham manager’s Chadwell Heath training ground office and leaked to a Sunday tabloid.

“I wouldn’t describe the person who stole the letters from my office as a mole,” he told the Evening Standard. “He was more of a rat.” Harsh words.

When David Beckham’s armour-plated BMW was spirited away from an underground car park during a Good Friday family lunch in April 2006, the £70,000 motor soon found a good home – with the Macedonian government. The vehicle reportedly changed hands 20 times before it ended up in the Balkans, so interior minister Gordana Jankulovska put a stop to that – and kept it for herself.

“If Beckham asks for the vehicle back I will hand him the key myself,” smiled the politician after Becks didn’t come forward to claim it, before adding: “I’m a big fan.” Well, you would be.

You’d imagine stealing a Range Rover while the owner is standing next to it – with the police, no less – would be a tough gig. Not so for two Newcastle youths who pilfered former Magpie Nile Ranger’s ride while he was being breathalysed.

The car – easily identified, given it was painted black and white with ‘Ranger’ emblazoned on the bonnet and ‘Power Ranger’ on the boot – was recovered in the city centre soon after.

Goalkeeper Jerzy Dudek was sunning himself on holiday when almost £100,000’s worth of Champions League winner’s medal, 100 match shirts and the Pole’s Porsche Carrera were stolen from his Merseyside home. The stash was eventually found in the house of an Everton supporter who claims he was keeping hold of them for a friend. Of course he was.

7. Beware Big Dunc when he needs a seat

Only the galactically stupid would go out of their way to steal from Scottish man-mountain Duncan Ferguson, so the two separate burglars who went on the rob at the former Everton striker’s home must have cursed their luck at being caught in the act.

One spent two days in hospital for his trouble in 2003; the other – two years earlier – was apprehended by Big Dunc, who sat on the intruder until the police arrived a few hours later.

Just days after winning the 1982 European Cup, Aston Villa heroes Gordon Cowans and Colin Gibson were invited to show off the club’s glistening new trophy at the equally-glittering Fox Pub near Tamworth. A few beers into a game of darts, Villa’s heroes noticed something. The cup had gone.

It eventually turned up 100 miles away at a police station in Sheffield, where the officers on duty staged their own European Cup final through the night to see who could get their hands on the silverware.

10 of the easiest title wins in English football history

When the Jakarta Cup disappeared from a display case after Rosario Central had beaten the Indonesian national team and Benfica in 1975, the resourceful miscreant replaced the solid gold trophy with another made of “glossy paper and glitter”. It was recovered in the late ’80s, minus a few diamonds, and the thief still walks the streets of Rosario in Argentina with impunity. And limited artistic talent.

Glen Johnson was helping his mate to buy a bathroom in January 2007 when he was busted for inadvertently placing one toilet seat in the box of another. The difference between the seats was £2.35 but B&Q clearly thought they’d caught a criminal mastermind.

“We just burst out laughing, thinking: ‘Where’s Jeremy Beadle?’” laughed the defender two years later. “What thief walks through the till?” Not a very good one.

This feature originally appeared in the December 2014 issue of FourFourTwo. Subscribe!